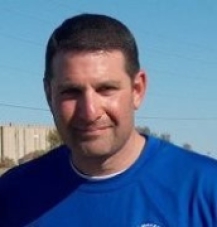 Youth development, in soccer is a process of creating and promoting a positive quality experience with young people. My goal is to build a team foundation that develops self-worth that everyone’s contribution makes a difference. I want to make every player feel special and know they can display there talents.

Marty has been mentored by some of the most successful coaches at the youth level who guided him through the most important process of being a head coach. Marty is known for developing strong relationships with his players with a teaching style that emphasizes self-confidence and self-esteem. Marty has over 17 years of coaching youth soccer in Kansas City.

Marty grew up in Overland Park, KS and attended Shawnee Mission South high school, graduating in 1981. He went on to attend college at the University of Kansas.  Marty’s family is a soccer family. His wife Darla, who he has been married to for over 30 years, has seen her share of soccer games and has traveled everywhere with their children’s teams. They have 2 children: Taylor and Blake. Taylor played D1 premier soccer with Sporting KC and KC Atletico Soccer from U8-U18. Her brother, Blake played premier soccer with Sporting KC Boca Jr from U8-U18. Blake  played for the U18 U.S. Soccer Developmental team. Blake graduated from Baker University as an All American forward for Baker soccer team. Blake signed a pro contract with Nashville SC in 2017.  Marty’s greatest joy is coaching his children and seeing players achieve their dreams of playing high school soccer and beyond.